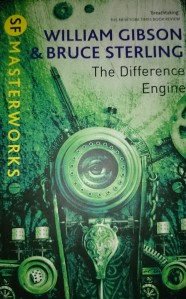 For at least a year now, I’ve been interested in steampunk. Not interested in the way where I rush out and buy every steampunk novel on the market and start collecting old gears interested, but more of a mild curiosity kind of interest. I guess I’m beginning to flirt with steampunk. If I see an article across the crowded internet, I’ll throw a coy look its way. So when I read somewhere that no novel has brought more to the steampunk movement than The Difference Engine by William Gibson and Bruce Sterling, I paid attention. And when the Science Fiction Bookstore had a classics sale and sitting on the shelf like a prophetic sign was The Difference Engine, I snatched it up. That was August. I’m still reading this book (page 310, out of 383 pages). I don’t even know why it’s taking me forever to finish this book. Maybe it’s the language. British chaps are too nice. There’s all this, ‘Why, I do say, dear fella!’ going on and it’s driving me mad.

People all over the world do it, why can’t I?

“Put the book down!” the cop in me screams.

“Never! Don’t tell me what to do! Viva la revolution!” screams back some crazy woman in my head.

I’ve decided to shut her up once and for all. That’s right. I’m doing research to prove to the perfectionist rebel in me that it’s okay to stop reading a book.

In July, the Guardian asked, Should you finish every book you start?  and discusses data pouring in from something called the Hawking Index. Named for Stephen Hawking’s book, A Brief History of Time, the method calculates how far readers get in a book by looking at highlighted passages on a kindle. The article, really more of a conversation than an article between Alex Clark, writer and literary critic, and Tom Lamont, Observer writer, goes on to discuss why each of them do or do not continue reading a book. I’ve never thought about why I’ve refused to abandon books before. After reading the article, I’m prone to side with Alex. I don’t like the idea of giving a book a paltry slim chance to please me within the first ten pages or so before I toss it aside and choose the next one. It feels petty and entitled.

I think the biggest reason though, is because I keep hoping something will pull me forward. I’ve started many books I thought I’d hate, only to turn the last page and realize somewhere along the way, I fell in love with them. If I had given up on them, I would have missed out on something wonderful. That’s not to say every book leaves a memorable impression on me, at least not in such a favorable way. Once, I put down a fantasy book because I couldn’t take another minute of the author’s propaganda. Little did I know then, this particular author is well known for his diatribes about everything from political views, to women and people either love him or hate him. I’m not sure I hate him, but his books aren’t on my bookshelf. Everything else, I’ve refused to give up on.

Which is why I’ve spent two months trying to finish a book I’m clearly not crazy about. It’s not bringing entertainment value to my relaxation party, I’m not immersed into a new world (1800s London, different, but not THAT different), it’s not even written in Gibson’s tight, crisp style. Am I wasting my time? Should I rethink my have-to-finish-what-I-start strategy?

I don’t know. Maybe. If I took the plunge and decided to abandon it, or any book for that matter, why would I do it?

According to the Los Angeles Times article, What Makes You Stop Reading A Book, Goodreads asked the same question. Why do you give up on a book?  Follow the link and you’ll find a handy infographic included which shows the top five abandoned books. I imagined they’d be obscure or contentious books. Surprisingly, they are current bestsellers. According to the data, the number one reason people abandon books is boredom. Poor writing, which I thought would be high on the list after the rise of self-publishing (and more importantly, the lack of editors), came second.

Another article identifies more of the books many start and few finish and takes a closer look at data gathered using the Hawking Index. While it does show us which books are abandoned, it doesn’t tell us why.

After considering this for days, I’ve come to a decision. I will give a book a fighting chance. If I do put it down, here are the reasons why:

1) The author is using the novel for propaganda purposes.

I’m scarred by the memory of that fantasy book. Do not preach to me. I’m not talking about exploring political dysfunction, or the rise of capitalism woven into a novel. In every book you’ll find a bit of the author in there, his or her beliefs, hopes, or ideas they’re exploring. Usually these are subtle and become part of the story. If I pick up a book about wizards, a sailor lost at sea, or an orphan boy who overcomes poverty and the harsh streets of London, I expect the book to be about those things. I don’t expect to read a massive info dump every ten pages about the inferiority of women and why things should stay that way.

2) I don’t connect with any character on an emotional level.

As I write this, I realize I lied to you earlier. I did put down another book. It was the third book in a series, and I had maybe twenty pages left. Yep. I know. It should be a sin to stop reading that far into a book. But, I put it down and I’ve never thought about those characters again, until now. Obviously, I didn’t care much about them. It’s a matter of personal taste. For example, there’s a bestselling author who writes dark fantasy and has a huge following. I read one book and didn’t connect with any of the characters. It’s a well-written book with gritty characters and well-paced scenes. The plot pulls you through from the first page to the last. Unfortunately, I didn’t like anyone and I don’t care what happens to them. I couldn’t connect with any of them. My husband has continued to read the books in the series. I’m character driven, though. I need a flawed, believable, complex character to connect with to keep me involved in the story. If you don’t give the people in your book any redeeming qualities, I’ve got nothing to grab onto. No reason to root for them. I’m still learning this myself as a writer, so I understand how challenging it can be, but as a reader, I need someone to care about.

I’ve also decided if all the characters in the book are the same with different names, I’ll put the book down. I’ve seen many indie published novels make this mistake, but I’m sure it exists in traditional ones as well. I want to play Dialog Jeopardy and be able to pull the words out of the story saying, ‘Ha! I know which character said that.’  I don’t normally read young adult books, but the Harry Potter books do this well. Snatch paragraphs of dialog out of the book and quiz anyone who’s read them. They’ll tell you without a doubt which paragraphs belong to Dobby and which to Hagrid.

Starting today I do not want to read a happy people, happy world, happy life story where the most exciting thing that happens is when Scruffy bites the mailman’s ass. I also don’t want to read sick people, sick world, and sick life without any hope.

If the book tells the same story I’ve already heard 100 times, but now the orphan’s name is Boyd and he herds horned rabbits instead of sheep on a farm before he rushes off to find his fortune in the big world, I’m still not interested. Though the horned rabbits bit is a nice touch.

Every one of us has read poorly written books, perhaps some of us have even written them, especially in our early writing days. I’ve always plowed through to the end. Not anymore. I think I’ll make a scale of 1 – 10. Perfection is 10 and 1 is illegible. If the story is compelling and the writing falls between 5-10 on the scale, I’ll keep reading. Hmm. Maybe 7-10. If I use the same scale on fact checking, where 10 is accurate and 1 is so riddled with mistakes I want to cry, I’ll stick within the 7-10 range.  I’m willing to grant leniency, but the author must have made some effort and the mistakes can’t rip me out of the story so many times I give up.

This one is an external reason. Sometimes I put a book down and I get so caught up rushing around, when it’s time to pick a book up again, the old one didn’t interest me enough and I choose a different one.

There you have it! And now for a pledge:

I, Cas Blomberg, do solemnly decree to give all books a fair shot, but if they fall short, I’m free to STOP reading them.

I feel so liberated! I don’t HAVE to finish every book anymore. I’ll give a book a hundred pages and evaluate it. If it fails the propaganda test, character test, tension test, or quality test, I’m tossing it!

What about you? Do you put a book down if it fails to engage you?

5 thoughts on “Why I Would Stop Reading a Book”