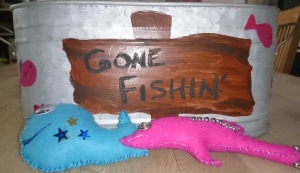 Week six has been fun. If you’ll recall, each day during week five, I read a poem about sleep, which in some cases meant death. Since that was depressing, I promised to look for something a little lighter this week and my son helped me pick the theme: Fish! You’ll notice I also included a different photo this week. The pink fish is the one he threw at me, the one who started this whole fish mess.

The best part of the project this week was the variety. The internet is full of funny and serious poems about fish, fishing, sea creatures and other aquatic subjects. However, most of the traditional poems I found had the word fish in them, but talked about something else, like parasols and aging. As a result, it took a while to find a poem that fit within the guidelines I had set up. Well, there was only one guideline really, but you’d be surprised how many things mention fish, while having absolutely nothing to do with fish. I also really enjoyed reading poems from lesser-known poets. Those tended be less constrained. They had an element of fun to them that was missing in many of the traditional poems. I ended up reading a lot more poems than I’m pasting here, but these are the ones I meditated on each day.

But not before I have had to know

He was born in front of my sunrise.

And I, a many-fingered horror of daylight to him,

Have made him die.

I have wondered a lot of things in my life, but I have never wondered how I look to a fish. Now I think about it all the time.

Frog thought, “I did”

Firefly thought, “I did”.

Fish thought, “I did”

Really enjoyed this one. I smiled. I laughed. Spent the day thinking about all the other things that could fit inside the belly of the poem.

Aunt Sugar rolled her nylons down

around each bony ankle,

and I rolled down my white knee socks

circling them just above water

and silver backs of minnows

flitting here then there between

the sun spots and the shadows.

Poems that have a unique voice reach out and grab me by the throat. This one does that to me.

February 8th – Poet As Fisherman, by James A. Emanuel

I have propped a well-thumbed book

against the butt of my favorite rod

and fished from my heart.

Yet, for my labors,

all I have to show

so little I know

of that pea-sized brain I am casting for,

to think it could swim

that lure me to this shore.

February 9th – A Mermaid for a Day, by Vera Duggan

Swimming in the deep blue sea

Taking in the many wonders

That were made for you and me.

Lovely, rhythmic poem. Left me feeling lighthearted and carefree throughout the rest of the day.

He hung a grunting weight,

and homely. Here and there

his brown skin hung in strips

and its pattern of darker brown

stained and lost through age.

The description in this poem floored me. I could have pasted any section here as my favorite, but I went with the beginning of the description so as not to spoil the ending if someone wanted to go read it. I was also struck by the line breaks. I wouldn’t have thought to place them in the same spots. It forced me to take a closer look at the poem and I liked that.

February 11th – Fishing on a Wooden Boat, by H. Blomberg

on a boat filled with bottles,

I screamed for my mother,

who came at once.

Then a big fish jumped at me.

We rushed to the house.

My daughter walked in while I was looking up one of the poems. We had a talk about poetry and she wanted to try her hand at it. This poem is her first try. Personally, I think she’s off to a great start. I love every word :).

Next week, I think I’ll go back to random poems. It’s been fun to look up poems with a specific theme, but adhering to rules takes away some of the fun.