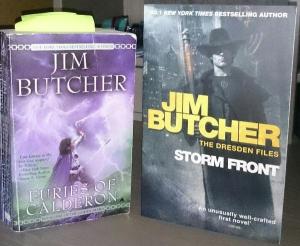 I love Jim Butcher. It wasn’t always that way. I hated him for a while, but now I love him. I guess hate is a strong word, and it’s not him personally I hated. I didn’t hate his stories either, or his writing. What drove me bonkers was how it felt like everything I wanted to write, he had written. I know a lot of people say that and this isn’t about big ideas, like, ‘I’m going to write a story about Roman soldiers and furies!’ and then get angry when I find out it’s already been done. Or people who swear ‘The Terminator’ was their idea. I don’t mean like that at all.

I mean little things, the tiny details. For example, one night, I’m watching a special on Mythbusters about how Archimedes created mirrors out of shields to set the Roman fleet on fire. I loved the story! How great is that? Innovation and fire! And soldiers using shields as mirrors, what a great image! I’m so sick of boring battle scenes with blood, body parts and swords. It’s all the same. This was something different and I could incorporate the idea into a battle, I was sure of it. I took copious notes and planned how I would use it in my current work. A few days later, I read about it in the Codex Alera series. I tore all my excited scribblings into tiny bits and threw them in the trash while grumbling a few choice words–meant for myself or Jim, I wasn’t entirely sure. Another time, I had created a secondary character, only to read about the character a couple of days later in another Codex Alera book. She had the exact same name, served the same purpose in the scene and performed the same job as the character I had written. Did you catch that part about the same name?! I had to rip the entire scene apart, which isn’t earth-shattering, I know. But this happened over and over. I’d be reading and come across a scene I had already plotted in my own work, so I’d throw the book across the room and tell my husband I was giving up. I made a list once of all the specific scenes, characters, and events that I’d had to scratch and start over because a few days or weeks later, I’d read about them in a Jim Butcher novel. This didn’t happen with other authors. Only Butcher and with very specific scenes.

I carried a grudge for about nine months, and then I got over it. It dawned on me I was looking at this all wrong. For one thing, I’ve discovered Jim Butcher and I think the same way about some things. We have the same ideas. Not all of the time, but sometimes. If I’m going to have a mind twin, I’m happy it’s a talented author who writes great stories and not some shady person. I mean, what if I had the same ideas as the leader for a terrorist organization? Or the guy who comes up with coloring ketchup blue? How awful would that be? So, yeah, I’ll take Jim Butcher any day.

I’ve since read the Alera books at least five times, and enjoyed them even more once I let go of my frustration =). I haven’t started The Dresden Files series, though. When I heard he was coming to Stockholm, it was the perfect opportunity to grab the first book and dive into his urban fantasy series.

I got to the bookstore early. After searching through a crowd so tightly packed together I couldn’t even sneeze, and a long wait in line next to Swedes who did not want to talk to each other (Swedes never talk in lines. Ever. If you’re in standing in a line in Sweden with a bunch of other people and you hear someone talking, they aren’t Swedish), I eventually spied a copy of the first book, Storm Front. I had also brought one of my own for him to sign, but wasn’t sure if I’d go through with it.

I handed him the first book, the one with an unbroken spine and a crisp clean cover that reeked of fresh ink and the cardboard box it was shipped in, and I said something corny (but true) about looking forward to reading the series.

When I handed over the second book, my beat up copy of Furies of Calderon with the spine so broken you can’t read the words on the side and a faint smell of old coffee on it, my face flushed with embarrassment. I had no idea what he thought about this book that looked like I had dug it out of a forgotten box in a garage sale. Compared to the pristine books laid out on the table, it was obvious which book looked better. I’d worried about it all afternoon. Should I ask him to sign it? No, it’s okay. I have the new one, that’s enough. I tried to talk myself out of it all the way to the point of handing it over. In the end, I went through with it. I stretched out my arm and offered him the beat-up, ear-marked, book stuffed with post-it notes marking my favorite scenes.

He smiled and said it was the best kind to sign. 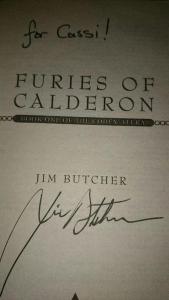