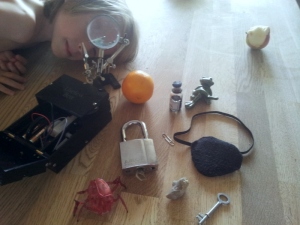 Last week, the University of Iowa’s International Writing Program launched their MOOC How Writers Write Fiction (if you’re interested in signing up, just click on the link). I took this course last year and thought it was fantastic, so I’ve signed up for it again. Unfortunately, the class isn’t even a week old and I’m already behind. At this point, I just have to laugh. I’ve discovered as a parent, especially as a mom, I must constantly reprioritize what’s possible, what’s probable, and what needs to stay locked in stasis somewhere in an alternate reality for a while. And yet, despite my revision work (Did I mention I’m finished with the novel?), school meetings, after-school meetings, running the house, celebrating my birthday (happy birthday world! So happy you came into my life all those years ago) and searching for a dog, I’m not too far behind. I watched the videos (most of them), I just haven’t completed the exercises, which leads me to this post.

Right. So the course started by talking about objects and how we can use them in our writing. Now I’m a big fan of objects and tend to use them quite often, especially when I’m playing with symbolism. Over the past year, I’ve realized they have even more potential, so I’ve tried to pay particular attention to them. Every object placed in my book has the opportunity to convey many things, either about the plot line, the characters, the world they live in, or relationships. In one of my opening scenes in my current novel, Joelle confronts another character, Karys, who is sharpening an ax. In that scene, the ax plays a larger role than weapon maintenance. It adds tension, sets up the relationship between these two characters, and is a symbol of the conflict between the different worlds each of these characters represent. In addition, by placing this object in an early scene, and using it in such a way, it sets the stage for later scenes. In other words, because the scene has been charged with this tension, when the reader comes across the ax in a later scene, he or she subconsciously brings along the tension created in the first scene. And it doesn’t have to be an ax. It can be a woman playing with a hair clip while she tries to explain an affair to her husband, or a father turning radio channels while his son tries to explain why he snuck out. It can be something simple or something loaded with extra meaning–though I prefer the latter–and this depth can be woven into several different scenes, following the characters throughout the course of the story.

When I realized the first few assignments for this course (all of which are late!) centered around objects, I was really looking forward to completing them. The first assignment was to write about an object and imagine where it came from. Ask questions like what its first memory is, or imagine what its ancestors felt like. I can add a number of questions to that. What if the object were placed a hundred years in the past? Or a hundred years in the future? What would someone who’s never seen that object think if I placed it in their hands? What history does the object hold? How many other people have held the object? Is it sad? Or happy? Or excited?

The second assignment was built upon the first and centered around creating conflict. Now that I have my object, what if two people walked into the room and each person wanted to do something different with it?

And I haven’t read the third assignment yet.

They were all due yesterday evening and I was too busy having a wonderful birthday celebration with friends and family to rush off and cobble something together for the class. Besides, I haven’t even decided which object I should write about. I did spend Sunday morning gathering up a few random objects around the apartment and laid them out (with my son’s help). I guess I should start there. At the moment, I want to write about something I imagine in the future. Old keys are easy to write about and anyone could come up with a fantastic history for a rock that my children swear is a dragon’s tooth. Give me a challenge. I’m leaning toward a useless box with random bits of wire, the magnifying glass with clips, or the half-eaten apple.