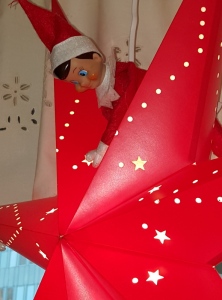 Our elf’s name is Wackack and he’s been with our family for about five years now. As I’ve mentioned before, the elf is a special tradition our family enjoys every year. He means a lot to us. Christmas is still magical for the children and that elf is one of the main reasons, not to mention it was given to us by a very special person. I honestly thought he’d be with us forever.

But this is the year our oldest daughter starts hearing from her friends about the sham. On the playground they’ll roll their eyes and share all the secrets they’ve uncovered about Christmas. The Santa mask they found in the back of their dad’s sock drawer. The presents they discovered already wrapped under the bed. I’m not sure what we’ll say when she comes asking questions (other than, ‘Why are you digging around in your father’s sock drawer?‘). I haven’t thought this far in advance and I should have.

But when they’re three you’re just so darned excited to see the smile on their face. When she was one, she didn’t care about presents. At two, it was, ‘Huh? You want me to rip this shiny paper? Okay. Whatever.‘ But three? Three is the magical year. The year she finally understood that a fat old man with a beard shows up and gives her presents at Farmor’s (Far = Father. Mor = Mother. Farmor = Father’s mother) house, because in Sweden that’s how it works. The old guy shows up AFTER dinner when the kids are so cranky they’re almost in meltdown mode.* But it doesn’t matter. No one cares why he shows up to pass out toys or what time he gets there. Instead we say things like: ‘Did you see the way the light shone in her eyes when she saw him?? Did you hear how she was so worried he might fall in the snow? The hug! The smile! Aww!’ On a cuteness scale, it was off the charts. So we kept the magic going, not just for her, but for her brother, too. Because we’re not monsters.

And now here we are on the cusp of the revelation and to top it off, I think the elf wants to retire. He’s the one thing that really ties it all together for them, Santa and the North Pole. Here’s how the elf works, at least how OUR elf works. Your elf might have a different game plan. Our elf shows up the day after Thanksgiving. The kids work themselves into a frenzy writing out their lists days before he arrives. When he gets here, they roll up the lists as small as they can and shove them in the elf’s arms because each night the elf whisks away to the North Pole and gives a report to Santa. What better way to get your list straight to the Big Guy? So he reports in and when he’s done, he hops over to the local Frosty Bits Bar and Grill to drink hot cocoa and shoot the breeze with his elf buddies, and then he flies back to our apartment where he magically teleports through the walls and settles into a new spot, surprising the children anew every morning.

Here’s how it actually works: We watch the kids run around giddy with excitement about their lists. Hoping they’ll sit down and eat dinner we bribe them by telling them we’ll help them make the list. We even teach them how to roll up the list just right so it fits in the space between the elf’s arm and his belly, without touching the elf and disturbing his magic. After a long day we all fall asleep and dream about warm sandy beaches and trees made of sunshine, or a hot spa draped with holly, because that’s what you dream about in Sweden in winter. The kids wake up and find the elf. In the exact same place. With the lists still in his arms. The accusations start flying before breakfast is on the table. Who touched the elf? Who made him mad?

In reality, the elf’s teleportation skills went kaput a long time ago and Mom’s memory about moving the lazy elf every night gets a little hazy after 10pm.

So I’m sitting here this Monday morning wondering what I’m going to tell the children about Christmas this year when they ask me questions like, ‘Are you and Dad Santa?‘ and ‘You’re the one moving the elf, aren’t you? I saw you last night.’ Don’t get me wrong. It isn’t just about the Big Guy in our family. I usually make the children gifts every year, instead of spending a lot of money on big toys. I teach them Christmas is a time for sharing. And we read about Mary and Joseph and Baby Jesus. We talk about religion and holidays and how history has added bits and changed some things. We talk about these things because I want them to have as much information as possible about the world they live in. And I am a Christian so we talk about God.

But the magic of childhood Christmas might take on a different meaning this year and on Christmas Eve they might wake up to find a note written by an elf saying he ran off to join the circus. 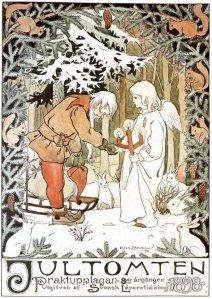 *In Sweden, it typically works like this. On Christmas Eve, you all gather together as a family. The TV is on because the minute Donald Duck shows up, you drop everything and come watch. No idea why. Dinner is typically a Julbord — meatballs, ham (sometimes), pickled herring, and some other weird fish stuff. They also have yummy Christmas bread. Glögg is one of the drinks of choice, which is mulled wine. Many families also drink Julmust, which is a dark non-alcoholic alternative to beer that I think tastes nasty, but most Swedes love it. After dinner, you wash the dishes and clean up. If you have a sauna, you take a quick sweat bath, which you can follow with a roll in the snow if the white stuff is on the ground.

Then someone says they forgot to get a paper and they need to run down to the store. Usually that someone is Dad, who is conspicuously absent when Jultomten (the Swedish version of Santa) shows up a few minutes later knocking at the door with a lantern and a sackful of presents. The kids help Jultomten pass out the gifts. Everyone opens their gifts, lamenting whenever possible about Dad’s absence on such a momentous occasion. They might even mention how unlucky Dad is that every year he misses the big event. Jultomten leaves and a few moments later, Dad arrives with a newspaper and a look of surprise on his face upon seeing all the presents. Then it’s time to pack everyone up and head home because it’s important to teach children to wait all day (YEAR) long for something they can only play with for thirty minutes before they need to fall asleep.

Swedes don’t stress about the holidays. They enjoy the moment. Take their time. And it’s a wonderful feeling. The focus is about enjoying each other’s company.

** Full disclosure — Sweden believes in gender equality in their Jultomten society. My husband’s sister played the part and was the one our daughter worried about falling in the snow =).