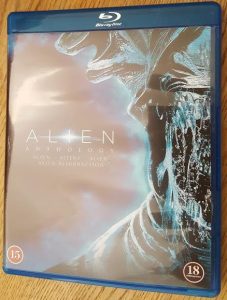 Aliens have invaded our home. Last week my husband decided I needed some classic sci-fi material logged into my brain for recall later. Ships. Robots. Technology. Things like that to stick in the back of my mind for general reference. Feedback from my writing group over the last two short stories I wrote hinted at a Blade Runner feeling, despite my having never watched Blade Runner. After this revelation, my ever-helpful husband picked himself off the floor and promptly ordered the film, along with the Alien series, for educational purposes, and I think a measure of good-natured sci-fi snobbery, because how dare I write sci-fi without having seen the classics? The weekend dawned rainy and full of angst for the entire world and a very personal upper respiratory infection that forced us to spend the Swedish Midsummer sick in bed. In other words, the perfect opportunity to watch a bunch of old movies.

Blade Runner shattered what little expectations I had of the movie. Little running and very few blades. I kept thinking Mad Max (which I haven’t seen either. I did, however, grow up with MTV and remember a video with dust, loud vehicles and Tina Turner belting out some tune about not needing heroes). What I saw was a cross between Chinatown and something else. My only complaint was how long some of the scenes were, which showed me I’m not as immune to the instant-gratification digital age as I once thought =(. Overall I enjoyed it. I liked the mood. The details. The story. The relationships between all the characters. But it reinforces the idea that expectations and realities are quite often two different things. That, and how titles set up expectations.

I didn’t want to watch any of the Alien movies. Did my husband pick up on the grumpiness and irritability? If he did, he either chalked it up to general not-feeling-well moments, or blatantly ignored me. Not only did he insist on subjecting me to this torture, he kept asking what I thought. I spent a few moments almost angry at having to watch sci-fi horror, because I didn’t want to have nightmares. I wouldn’t make him watch the sappiest love story I could find. Despite my misgivings, I did like some aspects of the movies (we’ve only watched the first two). I love Ripley and that she was written during the seventies and eighties (did you know the movies were that old??), a time when women were more likely damsels in distress, makes her even more special. Aliens that burst out of my stomach, though? Still not my thing.

Wonder what he’ll pick out for our next movie session. As long as it doesn’t involve sharks and strange weather systems, I think I’ll agree to watch it. If you have suggestions, I’ll be happy to hear them.